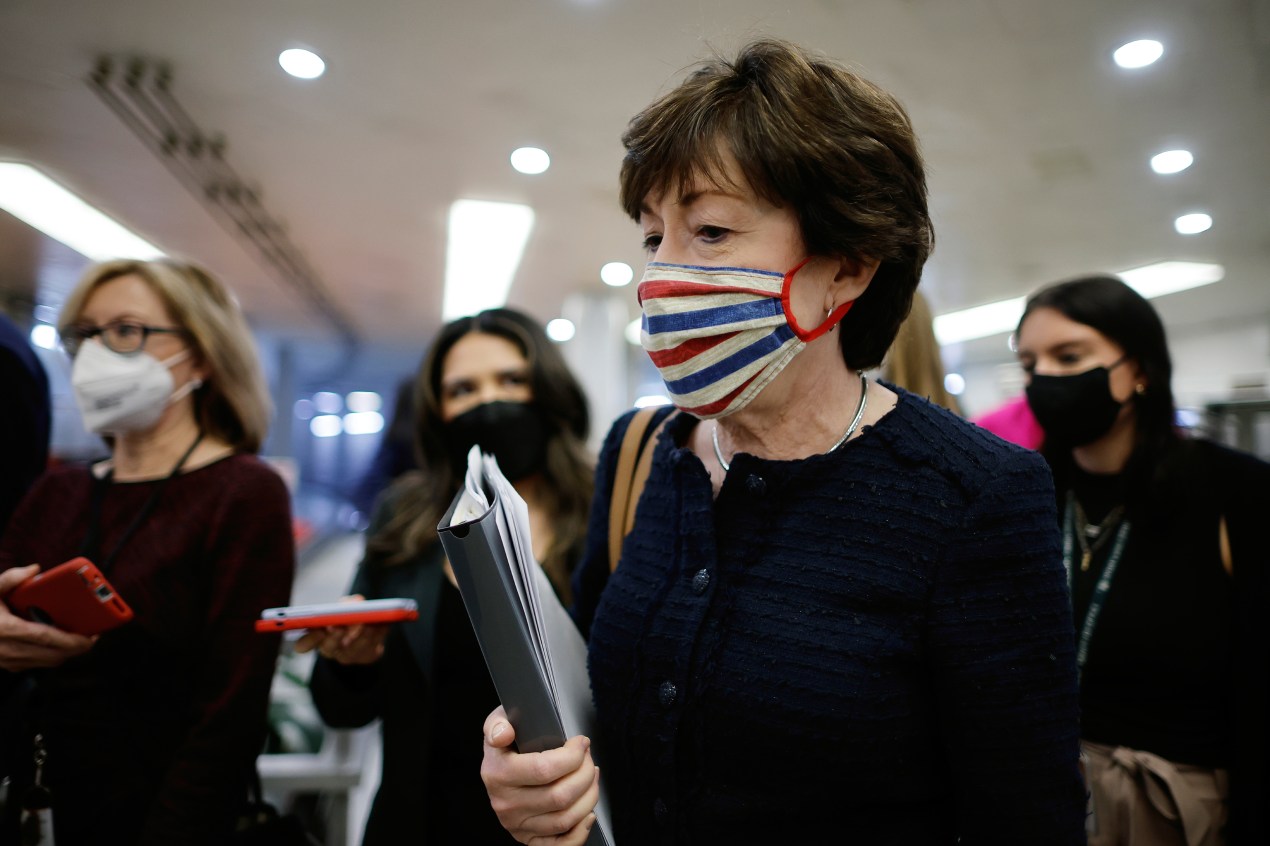 Sen. Susan Collins (R-ME) talks to reporters as she heads to the U.S. Capitol on Feb. 7, 2022, in Washington. (CHIP SOMODEVILLA / GETTY IMAGES)

The chances of passing election-year legislation to help people afford insulin — which weeks ago seemed mired in political fighting — are looking brighter as a bipartisan effort to tackle the issue takes root in the Senate.

That effort is still in the early stages, but it is moving forward with the support of Senate Majority Leader Chuck Schumer, who tapped Sens. Susan Collins (R-Maine) and Jeanne Shaheen (D-N.H.) to craft a compromise that members of both parties could accept. Adding pressure to the Senate’s efforts was a vote by the House on March 31 to pass a different bill that caps out-of-pocket insulin costs for many patients with insurance at $35 a month.

Collins said in an interview March 30 that the two senators had come up with an outline based on a bill they worked on three years ago that goes beyond capping what diabetes patients pay and aims to bring down the prices drugmakers charge.

“It tackles the broader issue of the high list price for insulin, and the conflicts of interests that occur in the chain from manufacturer to the consumer buying it at the pharmacy counter,” Collins said.

The idea of reducing patients’ out-of-pocket insulin costs is immensely popular, and more than half of the public sees it as a “top priority” for Congress, according to a KFF poll out last week.

It had been a key selling point of President Joe Biden’s Build Back Better plan, but when that legislation stalled, Biden and Schumer gave Sen. Raphael Warnock (D-Ga.) an open lane to promote a stand-alone measure identical to the House bill that caps insulin costs at $35 a month for people with private insurance and Medicare coverage.

The political climate, however, presented roadblocks. The odds that a bill sponsored by a Democrat facing a tough reelection in the fall could get enough Republicans in the Senate on board seemed slim, and even some Democrats were nervous about stripping the insulin provisions from a possible revised version of the Build Back Better bill. So Schumer embraced a different option from Collins and Shaheen that would include a cap on out-of-pocket costs and possibly draw more votes.

Insulin prices have spiked dramatically since the early 2000s, with Americans paying 10 times what people in other developed countries pay.

Although Collins said details are still being worked out, her legislation would be based on the pair’s earlier bill, the Insulin Price Reduction Act of 2019, which aimed to roll insulin costs back to what they were in 2006. It would have done that by barring rebate payments for insulin to pharmacy benefit managers — those intermediaries who negotiate price breaks for insurance companies and determine which drugs the insurance plans cover.

Collins and other critics of PBMs believe they inflate prices because they favor higher-priced drugs from which they can extract a larger rebate and therefore more profit, which gives drugmakers extra incentive to raise list prices.

Under that 2019 plan, drug manufacturers who agreed to return to 2006 costs could then raise prices each year only at the rate of medical inflation. The senators estimated the plan would lead to a 75% cut in prices from those listed in 2020.

“There’s a very complex system which essentially encourages high list prices, because the pharmacy benefit managers frequently receive a percentage of the list price,” Collins said. “So their incentive is to choose one that is higher-cost. And so we are trying to address that broader issue, as well as looking at the out-of-pocket costs.”

Warnock’s proposal to cap the cost of insulin is silent on list prices and benefit managers, an omission some Democrats complained about even as they voted for the similar bill in the House. They noted that since insurers would likely be forced to absorb the costs no longer paid by patients, the companies would likely raise premiums.

“This bill does not lower the price of insulin by one penny,” said Rep. Lloyd Doggett (D-Texas). “It just shifts the burden of paying for the insulin off of the shoulders of insured insulin users, and shifts it on to the rest of all of us who are paying insurance premiums.”

Collins also noted that the uninsured would not benefit from the House cap, which applies to Medicare and insurance companies but doesn’t affect drugmakers’ prices.

“It doesn’t help someone who’s uninsured,” Collins said. “When you address the high list price, then it’s going to help more people.”

Collins warned that much could change as lawmakers keep working with various stakeholders on a final bill, including diabetes advocacy groups, the Centers for Medicare & Medicaid Services, and the Congressional Budget Office. And as caps on out-of-pocket expenses and list-price changes start interacting, things get complicated, indeed.

“We’re talking to CBO, which says it’s so complex that they need a new model,” Collins said.

The politics also remains tricky. Collins and Shaheen never got their measure close to the Senate floor in 2019 and 2020 when Senate Minority Leader Mitch McConnell was majority leader. They did attract some praise from both sides of the aisle, and conservative North Dakota Republican Sen. Kevin Cramer was a co-sponsor.

While that opens the door to GOP support, Collins said she was still only at the stage of circulating among her colleagues what she called a discussion draft.

Republicans in the House who voted against the $35-cap bill panned it as a political stunt, saying Democrats should have advanced ideas that had been worked on with Republicans.

Such objections could not block the bill in the House. But in the Senate, Democrats command only 50 votes, and it would take 60 to pass the legislation.

Although GOP members of the upper chamber might also be opposed to Warnock’s bill, one of the House sponsors argued that having the House advance a dramatic cut in insulin costs — with the support of only a dozen Republicans — would raise the stakes for the Senate.

“If 10 Republicans stand between Americans being able to get access to insulin or not, that’s a good question for 10 Republican [senators] to have to answer when they go back home,” Rep. Dan Kildee (D-Mich.) said ahead of the House vote. “So we’re gonna pass this bill, and this will put the pressure on the Senate to act.”

He and his fellow Democratic co-sponsors also signaled their willingness to take a measure that included the Shaheen and Collins additions.

“Any train that’s leaving the station that gets folks affordable insulin — I’m open to any vehicle,” Kildee said. “We think this is a solution that would work. How it gets to the president’s desk, I’m agnostic on that question. Any way we can get it there.”